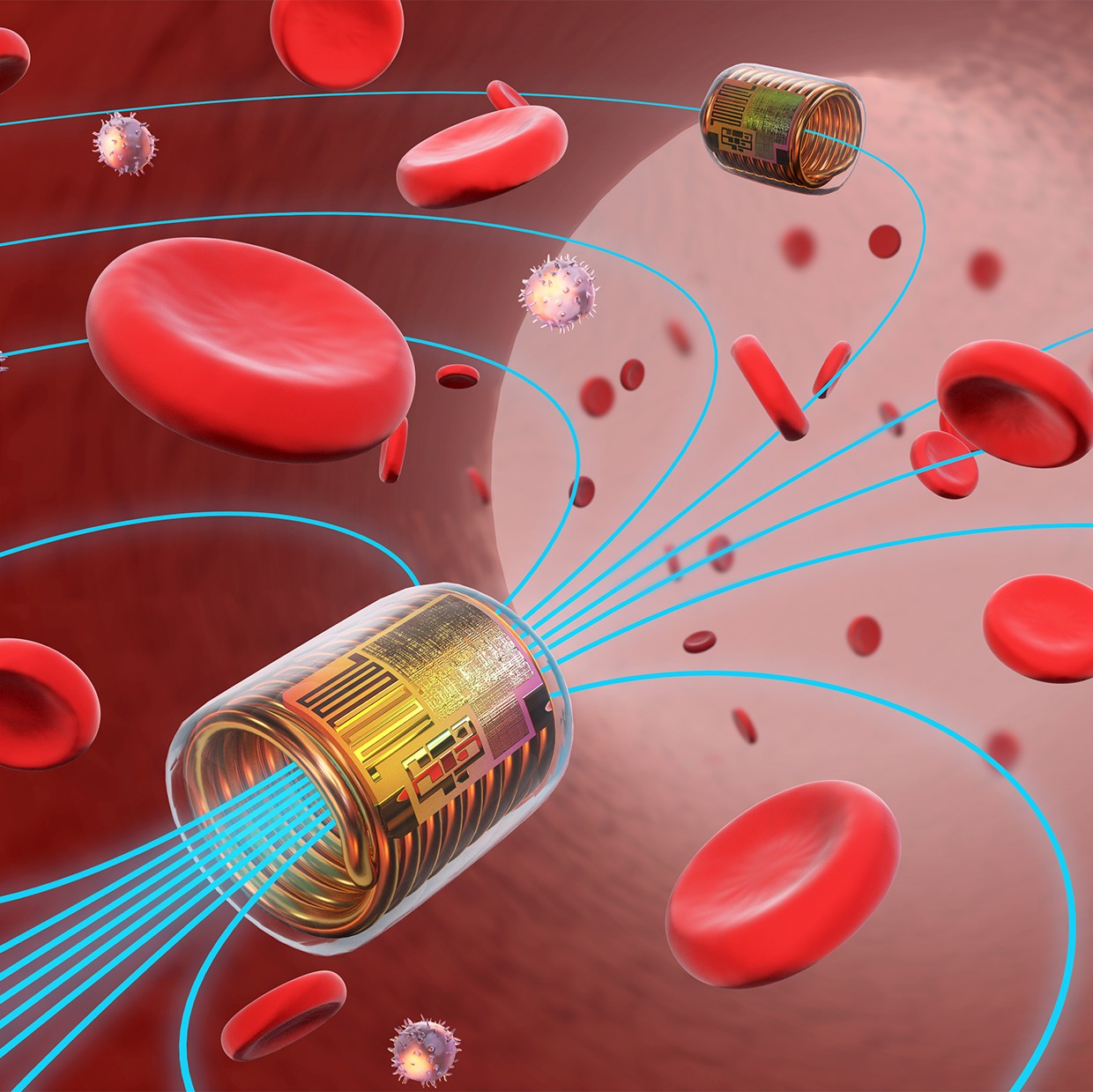 Recently, I had the pleasure to work on some medical/scientific illustrations for ETH Zurich. They wanted me to create visualisations of an envisioned medical in-body application of magneto-inductive microsensor networks, which are being developed by a research group of the Department of Information Technology and Electrical Engineering. The nodes are powered by an external magnetic field, but the magnetic near field furthermore serves as physical layer for wireless communication, enabling node cooperation and forwarding of measurement data for monitoring and diagnosis.

You can see the final approved illustration here: 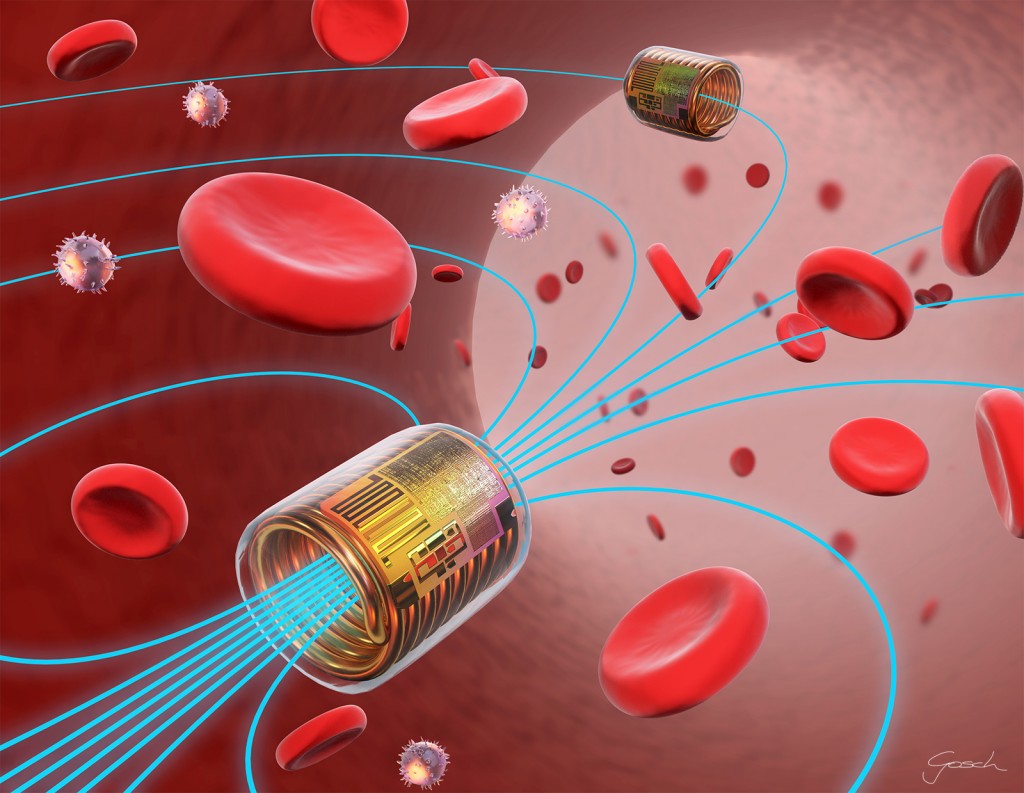 Main focus of the illustrations was the sensor node in the foreground, which basically consists of a coil and a comparatively small silicon-wafer-chip. Of course those parts had to be encompassed in a biocompatible layer material, which is shown here as nearly transparent and very smooth to emphasise the fact that this foreign object is minimally invasive and means no harm to the tissue around it. The silicon-wafer chip was a special challenge, since it reflects the light in certain ways that give it a colorful/shimmering look. I quickly realized that the effort to make it physically correct is way beyond the scope of this project, so I went with a manually created color gradient which I mapped to reflection coordinates for the albedo channel, which created a faked but visually similar appearance. :) 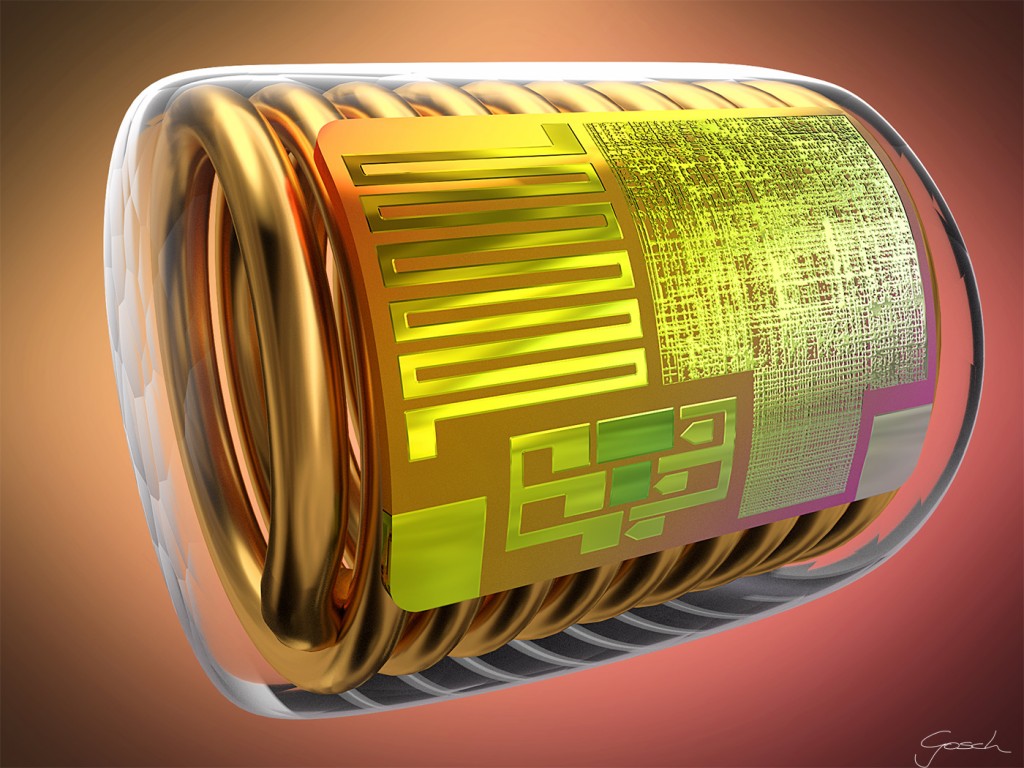 Take a closer look at the relevant part of the chip/platine material here (the rest of the material is pretty much standard pbr with a few masks):

For the red/white bloodcells and blood vessel I searched for existing shaders (THIS one by elZancudo being one of the better references) but ended up creating my own versions. You can see my material for the red blood cells here:

I created several illustrations with varying amounts of red blood cells, not only to let the client decide which one they liked best (we went through a lot of iterations anyway) but to have different illustrations depending on the purpose. It makes sense to have a version with less red blood cells (in back and foreground) if the illustrations is to be printed at small scale in an article, while having a version with lots of detail (which would lead to visual clutter with the small version) for big printed posters for example. Most of these variations were achieved in post-processing, I rendered lots of different layers of bloodcells which I could then simply hide or unhide depending on the client’s request. Another important step of postprocessing was depth of field (DoF), for which I used the Cycles Mist pass instead of the z-Depth pass because the zDepth pass doesn’t seem to have anitaliasing available…

I also duplicated the Mist pass and put it on top of the image in “Screen” mode, which (combined with DoF) tremendously helped to achieve the feeling that this scene is happening at a very small scale inside a viscous liquid. You can see the important Mist pass here: 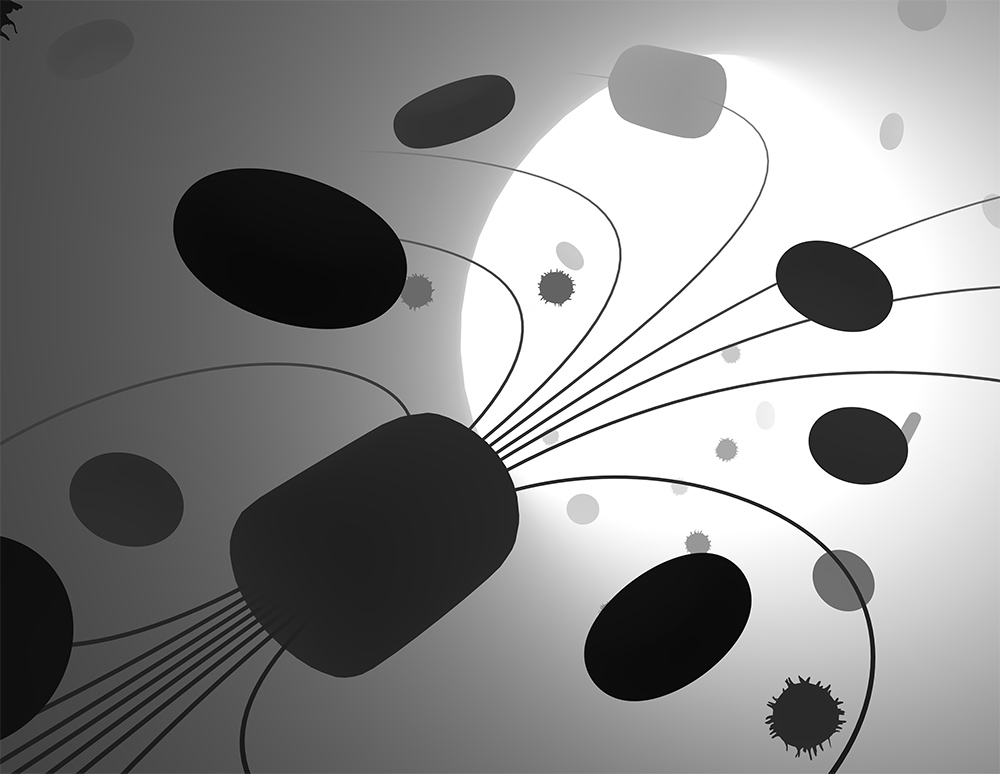 Rendering with Cycles was pretty fast and didn’t require much samples to get a clean image at print size, which is mostly due to the fact that I decided to do DoF in post.

Thanks for reading, have fun!