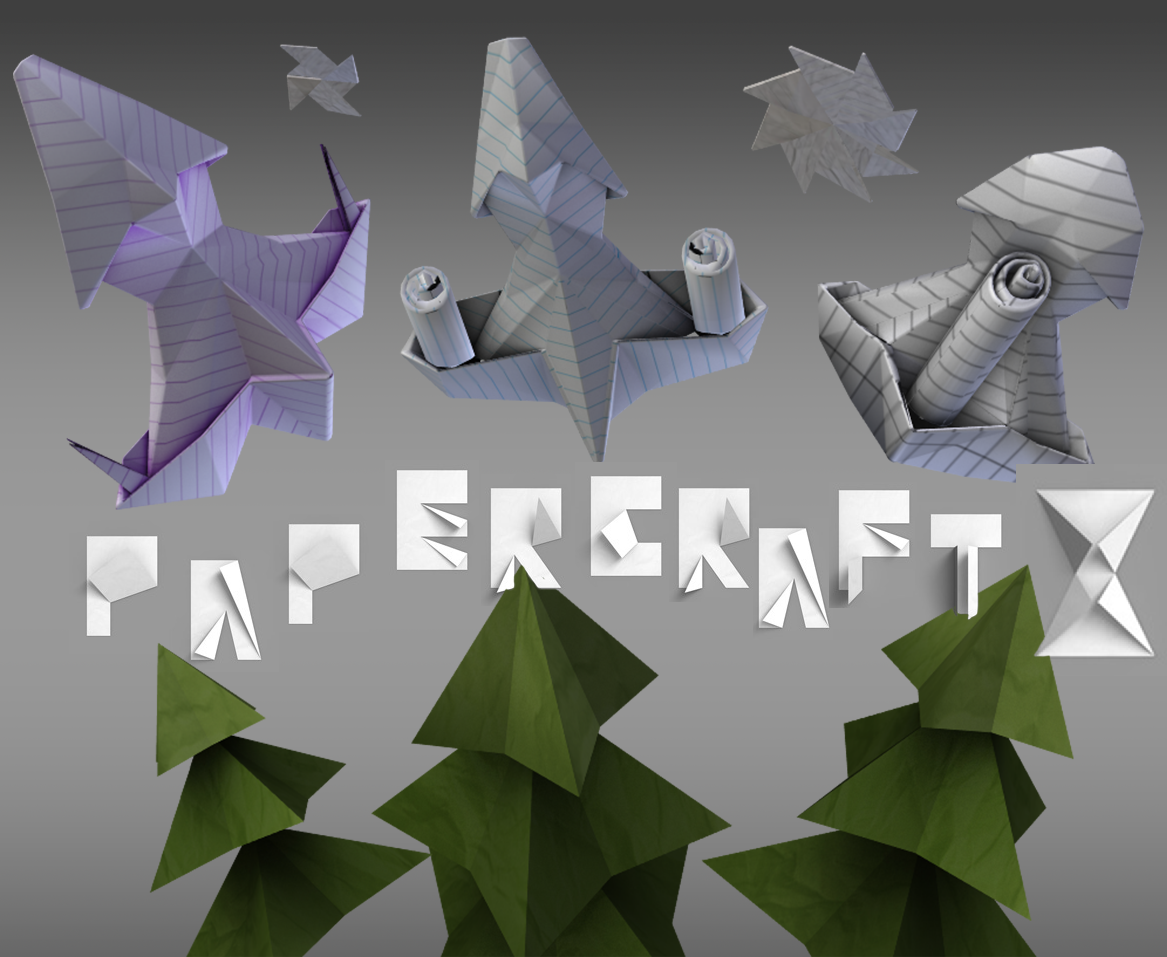 So the last few days, after returning from a Blender/Unity training in Germany (which I will be talking about in another blog post), I was working hard on a little game project. This project was the end result of a course at Graz University of Technology.

So, back to our (we were three guys) little project (click here to play right away): 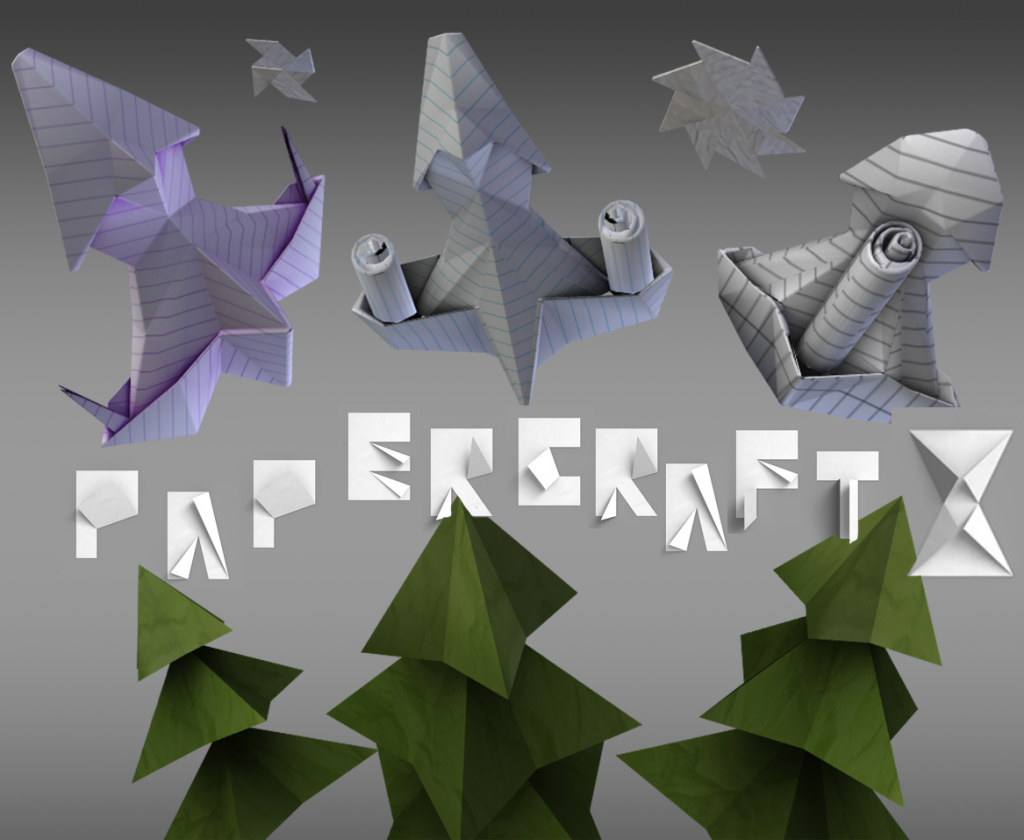 PapercraftX (We’re not great with names, I have to admit) is a classical Shoot’em’up (“Shmup”) with vertical scrolling direction and fast paced gameplay! You control your paperplane/paperspaceship/paperwhatever and shoot bullets at enemies to destroy them, while evading enemy attacks. We utilized fully 3D graphics in a 2D gameplay, which proved to work quite well for this type of arcade-style game.

The goal of the game is to get as many points as possible before dying. At this point the gameplay is purely highscore-focused and there’s no “winning the game”, the motivation to play again comes from the urge to either beat your own highscore or to beat the highscore of other players. 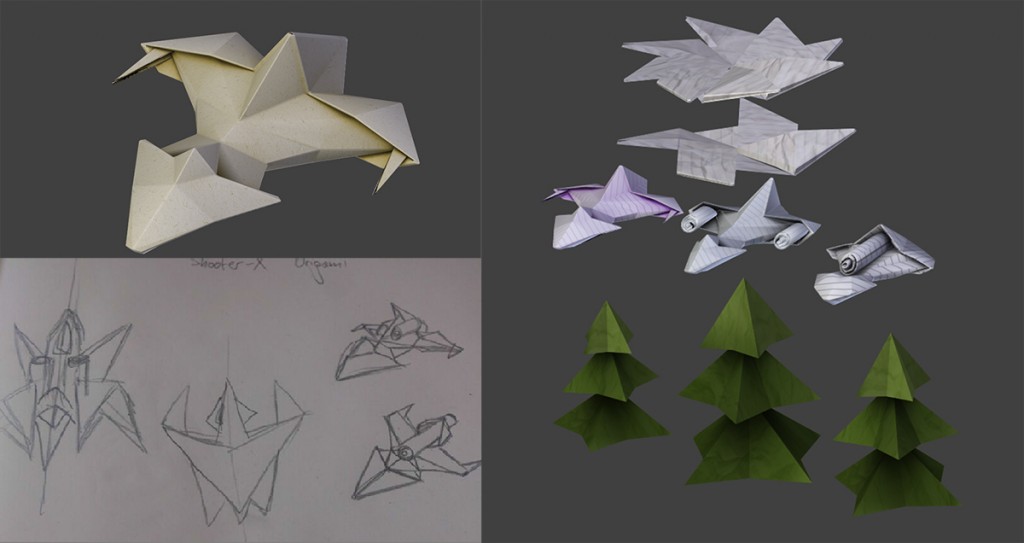 For the visual design we decided on an origami look, everything you see should look like it has been crafted out of paper, even the bullets. For the origami figures 3D models were created and paper textures applied to them. This enabled us to utilize simple forms but still maintain a polished look of the final assets. The simple forms proved of great value to not distract from the fast action gameplay mechanics while still looking good. To separate the gameplay area visually from the background scenery, not only textured clouds and fog were used, but also the saturation of the textures was altered. 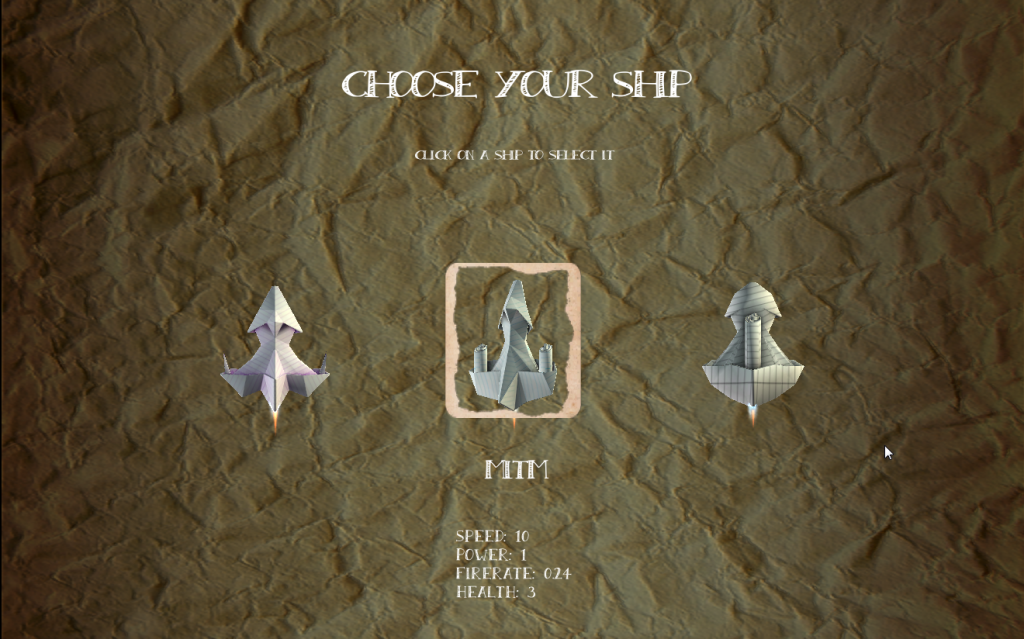 Ship Select Screen – It actually reads “SHIP” at the top, we need to change the font soon…

The player can choose between three different ships, which differentiate from each other in terms of movement speed, weapon power, firerate and health. These are only starting values though and by collecting upgrades one ship can surpass the others in a certain skill although it has the lowest value in that particular skill by default. Each ship has a primary and secondary weapon, which are used by either left/right mouse button click or, when using a keyboard, the Ctrl/Alt-keys. 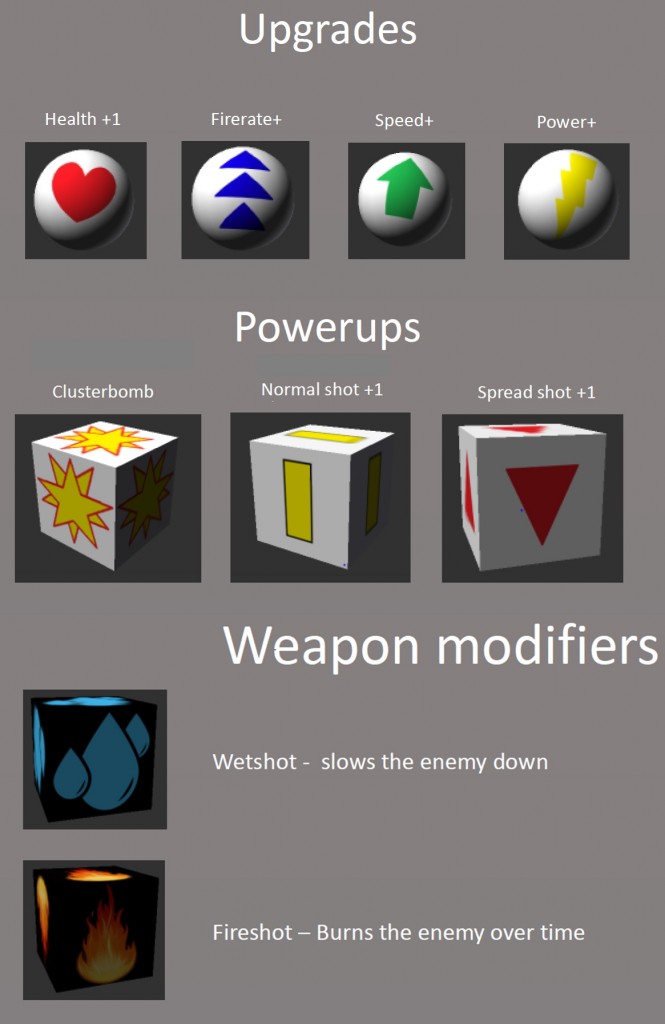 Fancy stuff to make you better at killing enemies

After the ship is selected the main game can begin. Pretty much immediately after the game is started the first wave of enemies appears and the gameplay begins. To stand a chance against the waves of enemies the player has to collect upgrades, which are spawned from killed enemies. Without collecting as many of these upgrades as possible it’s impossible to survive in the later parts of the game, when the enemies not only get stronger, but also faster and their numbers increase. There are different kinds of extras to collect: Upgrades, which increase one of the four basic stats (movement speed, firepower, firerate, health). Then there are powerups, which can give you an additional clusterbomb (these are very limited and to be used with caution) or add an additional shot. This additional shot is fired simultaneously with your regular shots, in either an straight forward (“normal”) or a fan-shaped fashion (“spread”). These powerups add single shots if you collect another one of the same kind, but they also replace your current powerup if you collect one of the other kind, effectively acting as downgrades if the player doesn’t pay attention to what he’s collecting. Last but not least there are modifiers, which can add a fire (enemies burn after being hit and take damage for 4 seconds) or a water (slows enemies down, because wet paper is apparently slower ;) ) ability to your shots. 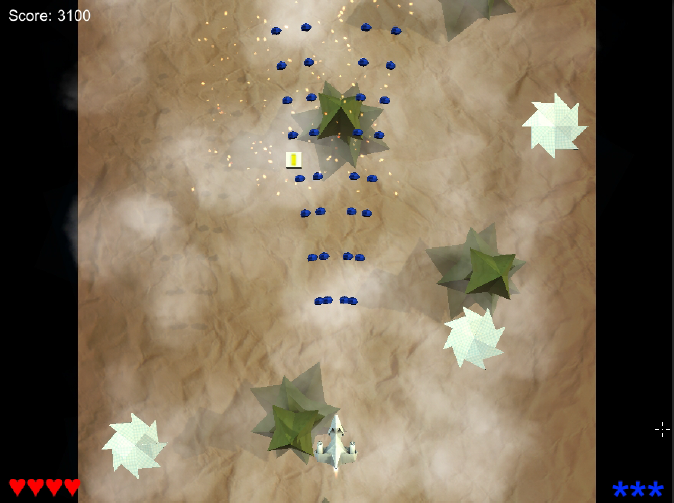 We intend on continuing with development, adding new enemies, implementing touch controls for mobile, adding epic bosses and generally adding better graphics since all of the final assets were created during the last three days of the project. Overall project duration was two weeks, we relied heavily on an iteration based workflow utilizing placeholder graphics for the programmers to work with. It’s created in Unity 4.6, but the upgrade to Unity 5 is likely to happen soon. Stay tuned for more :)

To play the game, just click on this link: