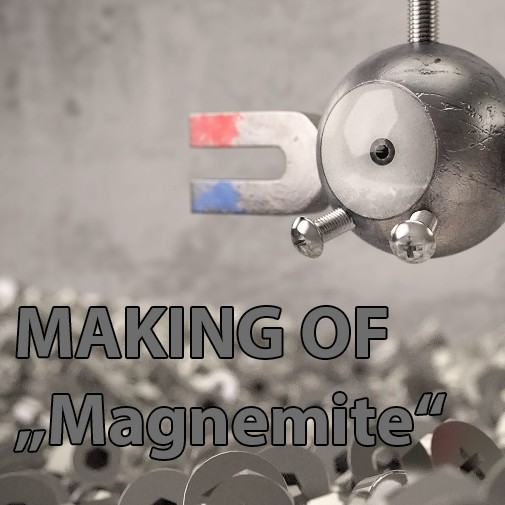 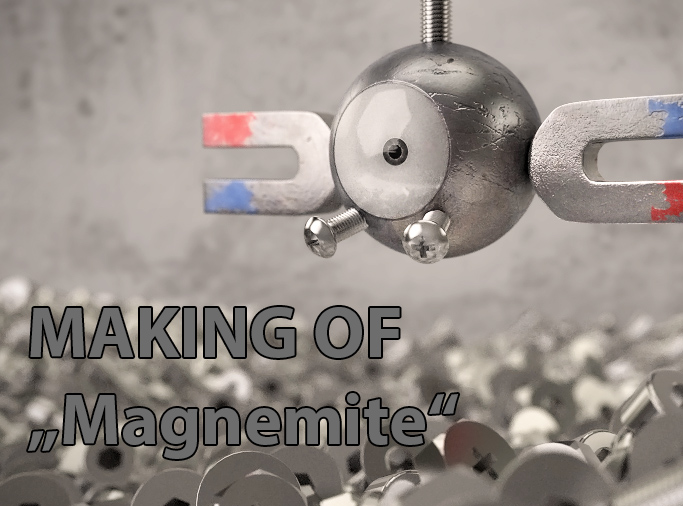 Hey guys, after getting some requests I finally found the time to write a little Making Of of my latest artwork “Magnemite”. So here you go (click pictures to enlargen) and don’t miss the opportunity to take a look at the embedded model at the bottom of this post:

Well, it’s not that great of an original idea to be honest. ;) I had some free time and decided to model and render a simple Pokemon, since most of them consist of fairly simple forms and are quick and easy to model. I actually used Pokemon as project exercises in the Blender workshop I held at my university because of this and as an added bonus…everyone seems to love them! So I quickly decided on a magnemite and googled for some references, in the end however this picture was all the reference I used and needed: 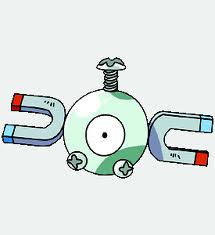 The modeling process was pretty simple, since the magnemite literally consists only of a sphere (UV-Sphere with the default 32 segments and 16 rings) and extruded cubes (see the picture above). Actually for the magnets I used a Mirror-Modifier with the object center at the center of the sphere, this way I only had to model and unwrap one of the magnets. However, don’t forget to apply the modifier before texturing and to change the UVs of the mirrored magnet so they don’t show the exact same texture and you get some asymmetry, which greatly enhances the realism of the picture! The eye is a seperate mesh and consists of a outer cornea layer (the transparent part of the eye) and a inner iris/pupil layer, pretty much like most cg eyes are modeled, with the exception that the iris/pupil is relatively small. 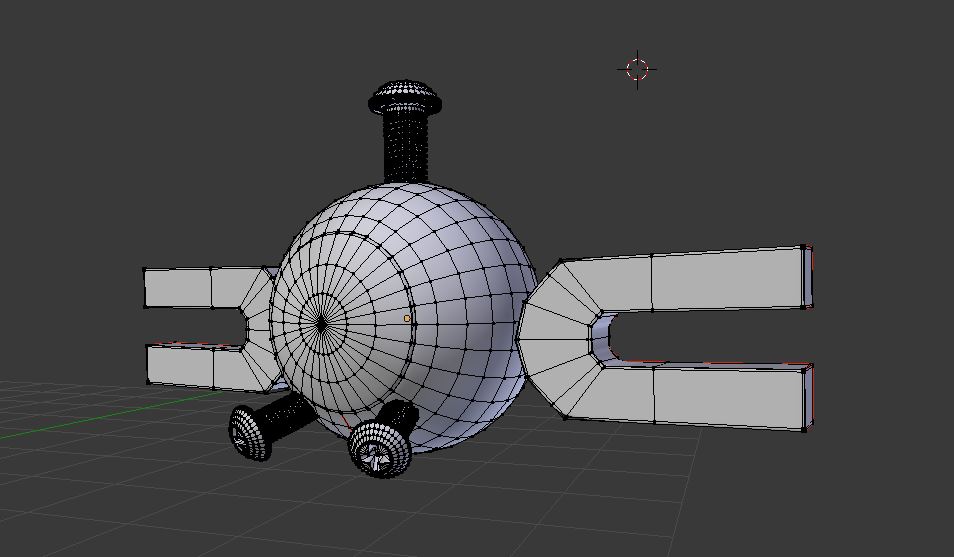 Wireframe of the main object in the scene, the sphere was modeled out of a cube…just kidding, it’s a simple UV-Sphere primitive. ;)

I didn’t model the bolts by hand, Blender includes a nifty addon called “BoltFactory” which is able to generate various kinds of bolts very easy and fast. To use it you first have to enable the addon in the user preferences (ctrl+alt+U or in the menu: File->User Preferences…) and then in the “Addons”-Tab either search for “BoltFactory” or find it at the “AddMesh” category. Click to enable it. If you press shift+A in 3D-View now or Add->Mesh you find the new menu entry “Bolt” to add a bolt and change its properties using F6 or the toolbar. This way I created bolts for magnemite similar to the ones in the reference picture and, with them added, modeling the main magnemite was finished.

To add more interest and an environment to the final picture I decided to add loads of bolts and screws under the main model. This would also greatly enhance the depth of field effect I had in mind to lay emphasis on the size of the magnemite. To model and place each of the bolts by hand would be way to time consuming and I would be way to lazy to do it this way, so instead I used a particle system to do the work for me. :) For this you have to generate some different bolts (using bolt factory this is an easy task) and add them to a group (select all of them and hit ctrl+G), then add a simple plane, subdivide and modify the plane using proportional editing (shortcut O). After that just add a particle system to the plane and under “Render” choose “Group” and select the group of bolts you previously created. This should do the trick, you can now change some properties of the particle system (also scrub through the frames to get one you like), here are the settings I used (click to zoom): 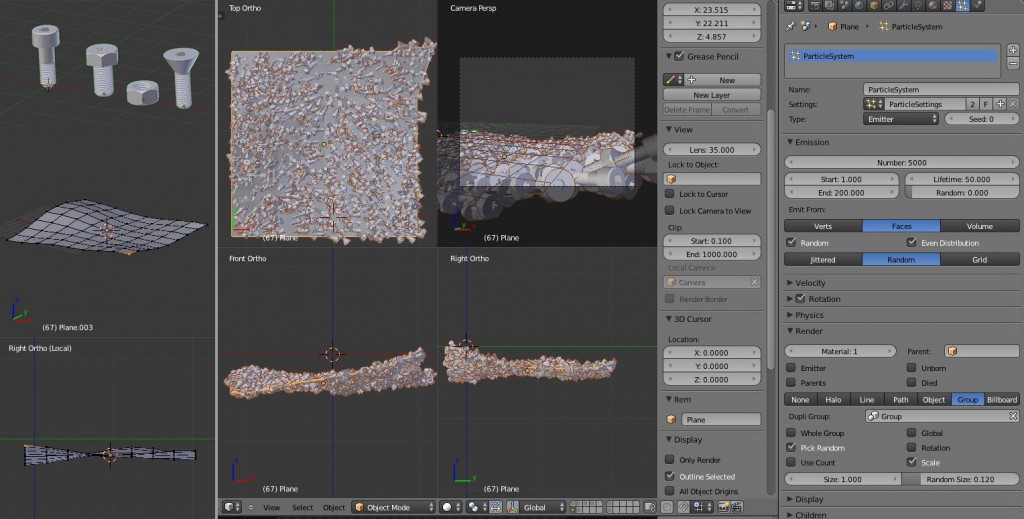 Ok, with the models in place it was time to move on to materials, uv-unwrapping and texturing. I used this scene to grow more confident in using Cycles and in creating materials for it. So the first thing I did was assigning materials to the different meshes, but before I began with actually editing the materials I uv-unwrapped the parts I was intending to use custom textures on: the main body, inner eye mesh and the magnets. The material for the inner eye can be seen in the picture below, it uses a uv-mapped (incl. mapping node for convenience) image-texture of the iris as a diffuse shader, but since this was kind of dull I used the inverted texture as a factor to mix the diffuse shader with an emission shader, which gave the result I was looking for.

After editing the outer eye/cornea material you likely have to go back and readjust the inner eye material. The cornea/outer eye/lens material can be seen here, nothing fancy: 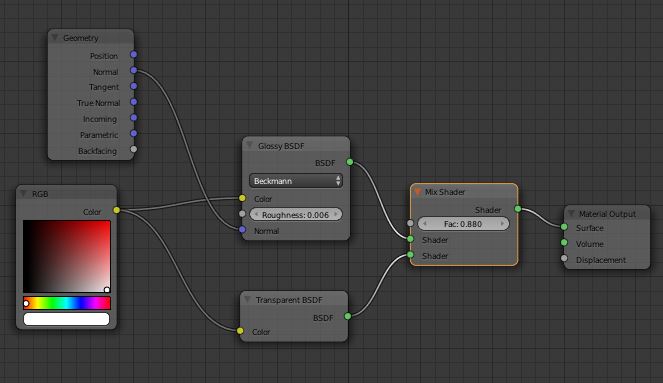 For eyes this material works better than a simple “glass” shader

For the main body, the following material was used (see picture below). It’s a mix of glossy and diffuse shaders, using a uv-mapped color texture. I added a baked ambient occlusion image (to bake this you still have to utilize the Blender Internal render engine) to the texture, in case you’re wondering what the dark parts on the texture are. I also used a bumpmap, which basically is just a version of the color texture with high contrast and some other minor adjustments. For more visual interest i added a procedural noise texture to the bumpmap. I prefer sticking the bump into the “Normal” sockets of each shader rather than using the “Displacement” socket of the material output node: 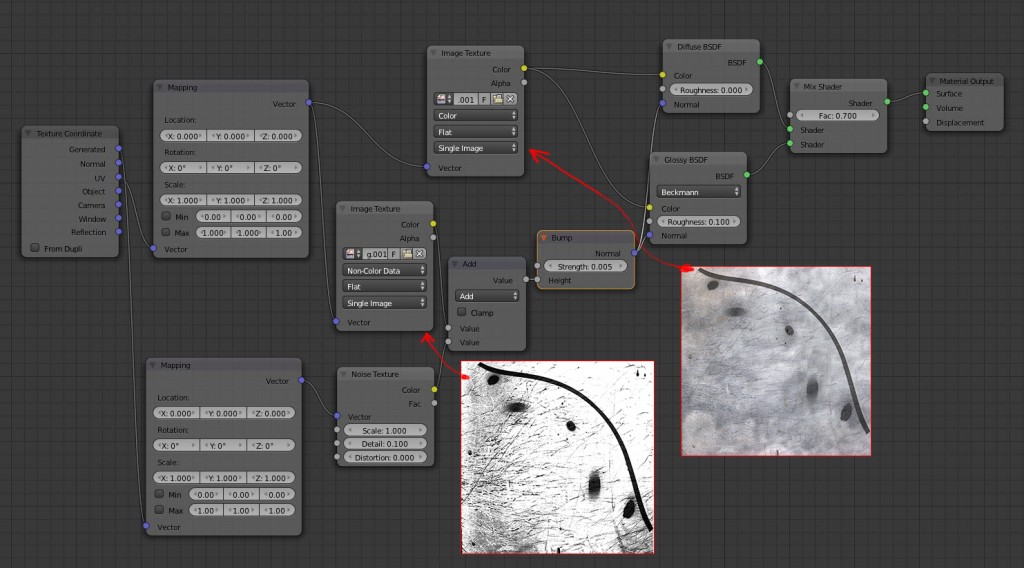 What did this magnemite do to get all the scratches on it’s main body? Fighting!

Next was the material for the magnets. The unwrapping was done on only one magnet before applying the mirror modifier, but I payed attention to only use half of the uv-space, after I was satisfied with the uv-layout I applied the mirror modifier, selected the newly created other half and moved it’s uvs to the empty half of the uv-space, so that each of the magnets uses it’s unique part of the texture, as I already mentioned above. Again it’s a mix of diffuse and glossy shaders, which is a very good base for metal materials. I used a custom painted texture, I payed attention to make the paint look old and the magnets scratched, as a little texturing exercise for my own. The most interesting part of this setup has to be the bumpmaps, where I’m adding two different scratch-textures (second one is not pictured, but looks similar to the one on the left part of the screnshot). Then a black-white mask of the painted parts is added. Since the mix-mode is “Add” and clamping is activated (effectively clamping everything to the 0.0-1.0/black-white range) this mask raises the paint on the magnets and lessens the scratches in it, giving it a realistic appearence: 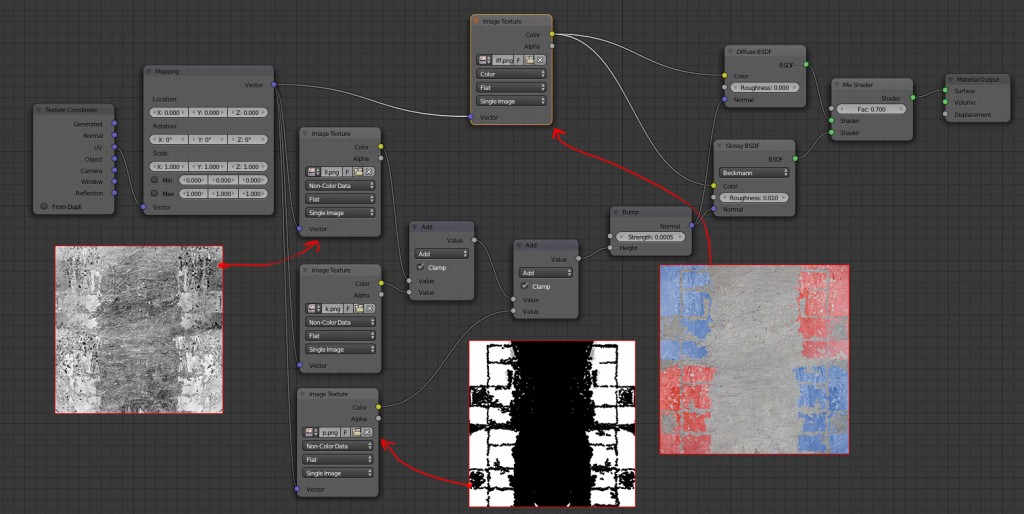 Noodle soup for the magnets

Finally the material used for all the different bolts, even the ones of the magnemite: 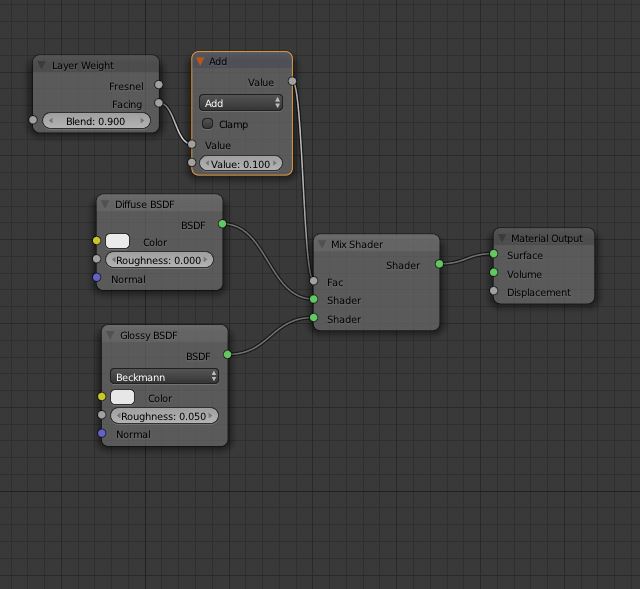 The lighting of this scene was pretty simple: a smaller main arealight with a yellow-ish color and greater strength on the right and a bigger blue-ish fill arealight on the left: 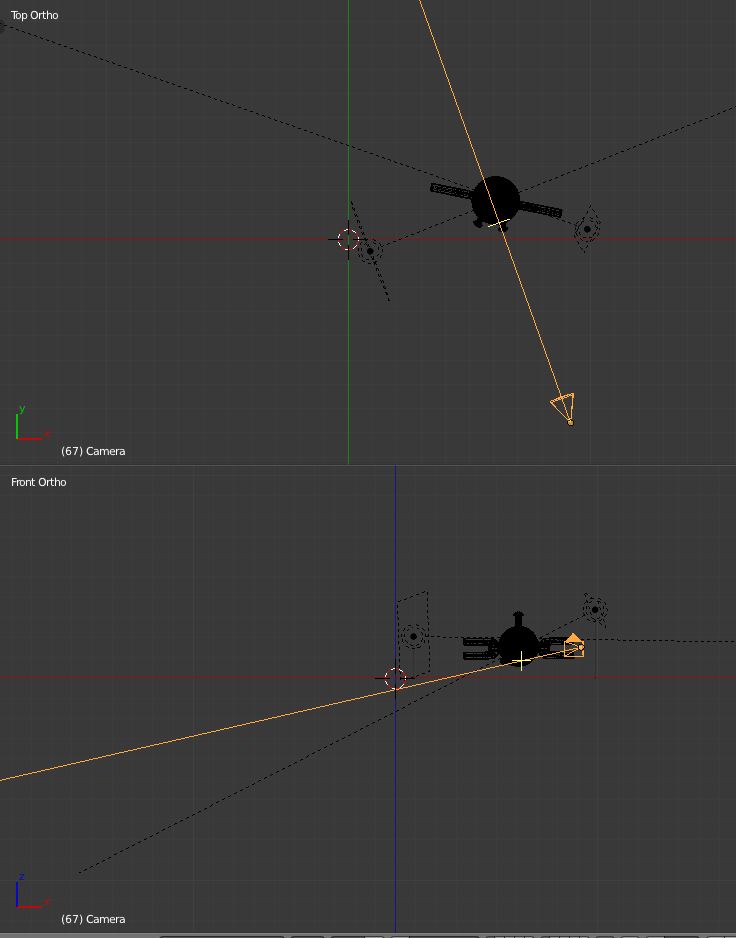 For greater realism and for the metal to have something to reflect, I added an HDR Image as environment texture. With the mapping node you can control your reflections pretty easy by rotating the texture. There’s been some great blog-posts about image-based lighting in Blender/Cycles by Reynante M. Martines and gregzaal to get sharper shadows without loosing tones in the reflections, go check them out! However since I was actually looking for a diffuse indoor look without harsh shadows a simple node-setup for the world was enough:

No fancy rendering setting were used, except that I utilized GPU rendering since no CPU-only features of Cycles were used in this image. Remember to set the tile size to a relatively high number (256×256) in my case, since with GPU rendering only one tile is rendered at a time. Also I decided to add a background in postproduction and set the film to transparent and the output format to png “rgba”. Here are my final render settings:

First I wanted to add the depth of field (DOF) in postproduction using a depth pass, but after some test renders I found it to be pretty quick and good looking when directly applying the DOF in Cycles. So I changed the camera settings to produce DOF (the focus point can be seen as a cross in the picture of the lighting above): 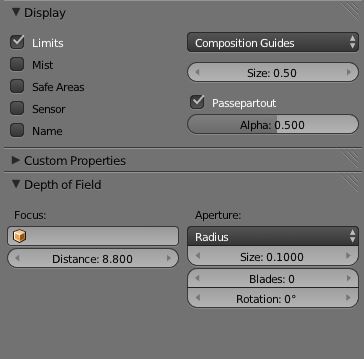 settings for DOF, everybody loves DOF

In the picture below you can see the raw render, directly out of Blender: 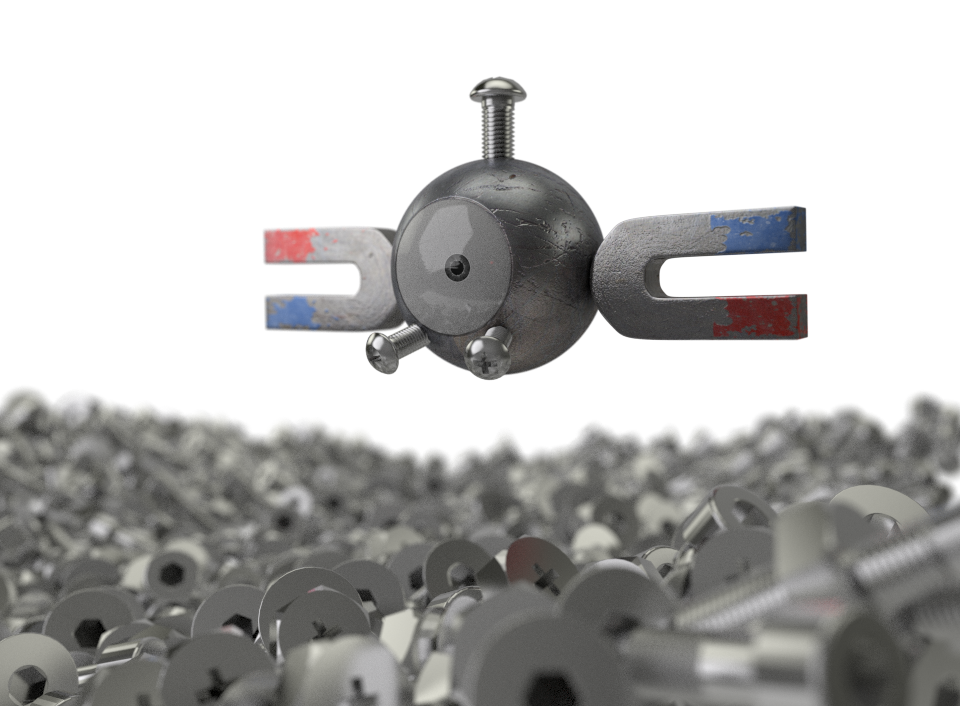 The raw render with an alpha channel (read: transparent background)

So I brought it into a image editing application (Photoshop or Gimp both work fine for this kind of task, although the missing of adjustment layers inside Gimp is a pity) and did some basic corrections. The first thing I did was reducing the remaining noise in the picture, especially in the area of the eye. After that I applied the usual brightness/contrast, curves and hue/saturation/color adjustments. After doing this for the whole image, I added a metal texture as background and blurred it using a blur-filter. I tried to match the blur amount with the amount of blur on the very far bolts, to make it seem like the bolts are touching a wall there. As a next step I selected specific areas like the underside of the sphere and brightened it using various adjusments like before. Finally I added a warm colored photo-filter on top of everything and put my signature in the corner. The signature is very important ;)

So here is the finished picture, thanks for reading and I hope it was useful or at least entertaining to some of you! :) 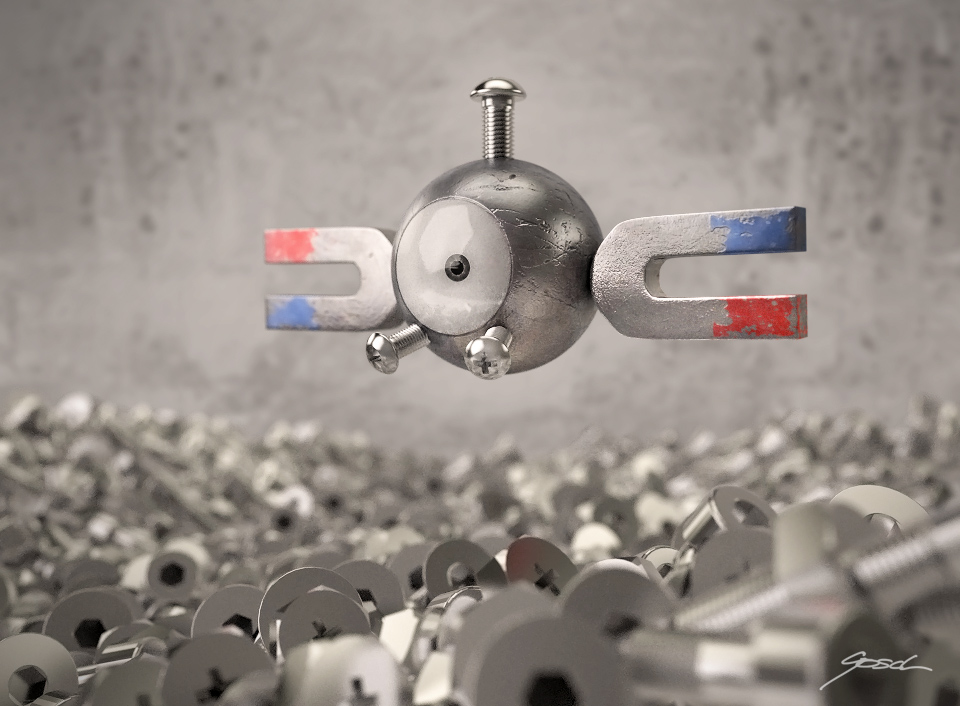 Aaaaaand here you can take a closer look at the model (don’t pay attention to the seam on the underside, I didn’t either haha), thanks to the great sketchfab.com :

Sometimes you have to wait or reload because either the textures or bumpmaps don’t show up, but maybe it’s just me and my old browser ;)